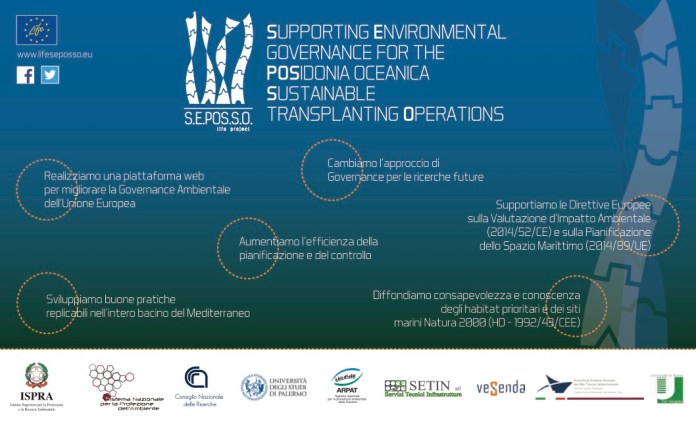 The North Tyrrhenian Port Network Authority is a partner in the LIFE S.E.POS.S.O. project – Supporting Environmental governance for the POSidonia oceanica Sustainable transplanting Operations – funded by the European Community under the LIFE 2016 Programme – LIFE Governance and Environmental Information. The project aims to improve the Italian Governance of Posidonia oceanica transplanting operations, carried out to compensate damages caused by coastal works and infrastructures.

Piombino & Elba island’s New Port Masterplan establishes that the Port Network Authority has to see to the monitoring of biocenosis throughout the entire physiographic unit of the Gulf of Follonica.

The seabed analyzed within the project was heavily degraded, especially in some areas (turning basin, harbour approach channel), affected by dredging down to -20 m.As patches of Posidonia were found, the North Tyrrhenian Port Network Authority, with the support of Piombino’s  Institute of Biology and Marine Ecology, invented an innovative transfer technique.

The removal of Posidonia oceanica was carried out in clods and then transferred to another area deemed suitable where monitoring buoys have been positioned and where there are natural underwater terraces able to preserve and help the transferred clods to take root. With the experimental clod transplanting method the plants were removed from the seabed with stem and roots, significantly reducing any anatomical and physiological damage.

The transplanting operation – funded by the North Tyrrhenian Port Network Authority – made it possible to compensate for the dredging of the harbour access channel covering an area of 340 four meter square clods totaling 1360 m2.